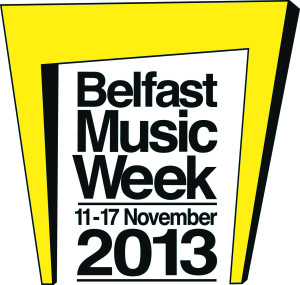 With over 250 events in over 80 different venues, Belfast Music Week is undoubtedly one of the largest gatherings of musical minds the city has ever seen. Running from the 11th-17th November, BMW offers up a variety of acts, exhibitions and industry panels suited to fans of any genre.
With so much to see and only one week to see it in, we at Soundspace thought it we would sift through the folk, classical and rock and do a roundup of the best electronic events at this year’s festivities so that all you people know what’s happening and when.

Originally part of a larger ICA curated exhibition on London’s subcultures, this event highlights the seminal role that Belfast brothers Noel and Maurice Watson played in introducing house music to the streets of London in the early 80s. From their involvement with the early Electro Streetsounds LPs to buying the prominent Delirium club in London, there can be no doubt about the influence the two brothers had on the music scene in the UK. The exhibition demonstrates the change in style that occurred in the mid-80s across the British Isles, from when hip hop and electro ruled the club to the emergence of the house and acid scene, and is a must for anyone looking to brush up on their dance history.

Noel will be playing a free DJ set on the 14th, from 9.00pm- late, at a special exhibition night.

New to Belfast Music Week this year is the NI Music Prize, an honour awarded to the best album produced by a Northern Irish act over the past 12 months. Decided by a panel of industry experts, the award is open to any genres, with performances on the night by a number of hopefuls.

Whilst the majority of the artists nominated are not electronic we felt that the fact that Space Dimension Controller will be performing on the night was a good enough reason to include the award ceremony on the list. The eclectic artist, real name Jack Hamill, has produced one of the most ambitious electronic albums of the year with ‘Welcome to Mikrosector-50’. Drawing inspiration from across the musical spectrum, ranging from prog rock to Prince, Hamill depicts the funky space adventures of his protagonist Mr. 8040 in an imaginative and unique way. In a world were laptop production is the norm it’s refreshing to see an artist who still knows his way around hardware.

This event definitely holds the title for most unique venue on the list as DJs Timmy Stewart, Dale Hooks and Conor MacParland take to the SS Nomadic to provide a night of house that guarantees to get the dance floor going.
Built in 1911 with the purpose of supplying the Titanic off shore, the SS Nomadic has been completely restored and now sits in Belfast’s historic Hamilton Dock.
Anyone familiar with Belfast’s bustling club scene should have no problem identifying these DJs but just in case you’re new to it; Dale Hooks is the resident at Kinetic in Mynt, Conor MacParland runs the night Schmutz and is one of the residents, and Timmy Stewart is a prolific DJ and producer who is also part owner of Extended Play, easily the best label in the city for quality dance music. Take it from us, you’re in safe hands for this one.

Also on November 14th we have the Belfast Music Week 2013 Showcase. The line-up consists of 12 of Northern Ireland’s most promising new acts, hand-picked by a number of industry experts, and is one of the best opportunities at Belfast Music Week to see the new wave of emerging artists within the city. The show will be held in the Limelight, which since its renovation last year, is quickly establishing itself as a key venue for the future of music in Belfast.

Like the NI Music Prize this event is not strictly electronic but with a performance from Ryan Vail on the cards we felt that it would be rude to leave this one off the list. Releasing on Champion Sounds, Ryan Vail consist of Derry duo Ryan Vail and Katie Cosgrove. Their music is a beautiful combination of broken beats and structured melodies, reflective of the duo’s diverse backgrounds. If you like heartfelt electronica then this is one to watch.

Curated by Champion Sound Music, with performances from four of the best new electronic acts in Ireland, this show is set to be one of the most interesting events at Belfast Music Week for a number of reasons. First off, Selector Radio, who air in more than 40 countries worldwide, will be down to record part of the show to be broadcast at a later date. Couple this with the fact that the elusive Unknown will be playing his first ever Belfast show, with support coming from the likes of dynamic Dublin duo Ghosts, and you can guarantee a night of outstanding, experimental electronic music. We had the fortune of catching an Unknown show last month in London and we can safely say he is one of the most promising new talents the city has to offer.

Also on Friday 15th, as part of the XporT13 Experience, we have DJ Yoda and Phil Kieran playing at T13 in the Titanic Quarter. One of the biggest names on this list, DJ Yoda has been playing for over a decade in parties all over the world. With his roots firmly in hip-hop DJ Yoda has been instrumental in developing the bootleg cut-up style and has been a prominent figure on the turntable scene for several years now. Progressing through a variety of different styles you never quite know what you’re going to get from a DJ Yoda live show so expect anything. One things for show his live AV show will surely add an element to proceedings.

Also on the line-up is ‘Shine’ veteran Phil Kieran. Hailing from Belfast, Phil has been an influential figure on the UK techno scene for the past ten years, with releases on labels such as Skint and Soma. In 2009 Phil achieved further acclaim when he released his debut solo album ‘Shh’ on Sven Vath’s Cocoon label.
With an eclectic line-up like this the night guarantees plenty of variety and is one for a crowd who don’t limit themselves to any one genre of dance music.

Easily one of the biggest UK DJs in the world, John Digweed arrives in Belfast as part of his 15 Years of Bedrock tour. Unlike many modern DJs who have garnered worldwide acclaim Digweed can back up everything that’s said about him with quality productions and performances. From his early days playing alongside Sasha, to setting up the hugely influential label Bedrock there isn’t much the guy hasn’t achieved musically. Playing a range of genres but never veering too far from techno and house there is no doubt that Digweed is an undisputed king of the electronic world.

Having just joined Bedrock, The Japanese Popstars will be providing the main support on the night along with help from Psycatron, other Bedrock new starts Two Hand Salute, and a selection of local acts.

Whilst not strictly in co-ordination with Belfast Music Week there’s no way we could leave this one of the list. On Saturday 16th Twitch celebrates the second leg of its 7th birthday by putting on one of the mainland’s biggest current DJs, Joy Orbison. Twitch have all the cause to celebrate this milestone as the past few years have seen them seal their place in Belfast’s underground scene as one of the best nights in the city for proper dance music.

Held in the usual location, the Bunatee Bar in Queen’s students’ union, the soundtrack for the night will be provided by a DJ who has a knack for keeping the crowd happy on the dance floor. Joy Orbison burst onto the scene in 2009 with his underground hit ‘Hyph Mngo’, since then his style has progressed and he has found success in pairing up with UK artist Boddika.
If Digweed doesn’t do it for you and you fancy something more bass driven, in an intimate setting, then Twitch is definitely the place to be on Saturday night.

Any new producers out there? Here is your opportunity to have any demos you’re working on analysed by a number of artists and industry experts. From The Japanese Popstars to Phil Johnston of Sonic Academy, this is a unique chance to get some genuine feedback that will undoubtedly help you progress as an artist. Simply bring your track with you on the night, or upload it beforehand on www.soundcloud.com/accessthrumusic. To find out more email [email protected]

The Belfast Record Fair is always a good place to pick up vinyl from any genre. Whether you’re in there on a mission or simply interested in what’s on offer with a range of both old and new records, and a number of CDs as well, if you spend enough time searching you’ll definitely find something worth spending your hard earned money on. A good day out for any aspiring DJs, samplers, or turntablists in Belfast.